This website provides information about the Parish Council, its meetings plus other activities within the villages. Please use the navigation link menu above to see a list of local Councillors, contact details for the Parish Clerk, Parish Council meeting dates, times and locations as well as the Minutes and Agenda and about the allotments. To contact the Parish Council, please use the Contact Us form.  Information is also provided on local clubs, organisations and amenities.  For all family and local history research enquiries, please click here.

Owing to the way that the rural district's boundaries are drawn, Frindsbury Extra (which is basically a continuation of the parish of Frindsbury in Strood) has the villages of Wainscott, Upper and Lower Upnor plus other outlying settlements while Frindsbury parish, which contains the parish church of All Saints, does not. Nonetheless, Frindsbury Extra parish, with its neat rows of houses stretching down the hill on whose crest the boundary is now drawn, still contains some six thousand inhabitants, and is the third largest population centre in the district.

Frindsbury was known in the early medieval period either as Frecondesbyri, probably meaning the Freeman's Court, or as Eslingham, after a manor of that name within its boundaries a little further to the north. At one period it was the mother parish of Strood itself. The lands of the manor of Frindsbury which then extended much further to the north through Chattenden into what is now part of Cooling, were given at various times to the church of Rochester by the reigning Saxon kings during the years 764-89. Offa of Mercia was the chief benefactor. The estates were lost by the church during the Danish incursions, but restored to the Cathedral of St. Andrew after the accession of William the Conqueror.

The Manor House, in Upnor Road, is a tall, late Georgian building, but a survey of 1623 showed a substantial earlier house on the site, and fragments of Tudor construction are still observable at the rear. Before the house stands the early medieval great barn, described by Rigold as "the undoubted queen of country barns". It is of immense length, over 210 feet, and is interesting in that it contains much of the original cladding. It dates from the close of the thirteenth century.

The manor of Eslingham, in the valley lands to the north, after being held by the Rikhill family during the medieval period, passed in due course to Frogenhill, Audley and Fisher. It was subsequently sold to Thomas, Lord Cromwell, Cardinal Wolsey's secretary, who was then rising to power. 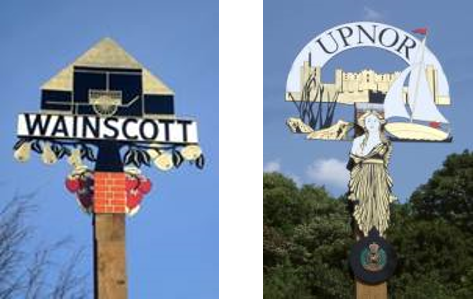 At one stage a general holiday was declared in Upnor for these ceremonial visits, with music, dancing, and village sports and competitions bringing gaiety, colour and pageantry to the day. There was even a mock Mayor-making ceremony, when a worker from the brick-making or the pottery works was dubbed Mayor of Upnor by the Lord Mayor of London. It is recorded that on occasion this "honour" was taken over-seriously by the recipient, or his wife, with ensuing difficulties. As commercial fishing ceased in the Medway, however, so the visits also ceased, having lost their value. Something that has also disappeared is the use of Upnor as a pleasure beach by thousands of visitors from the Medway Towns.

[Extracted from 'A History of Strood Rural District' by Brian Matthews, 1971. Permission to quote sought.] 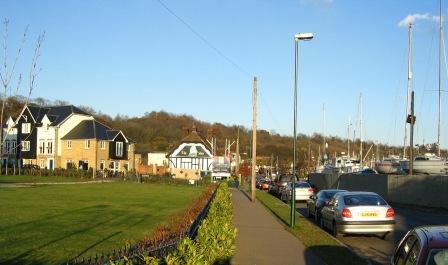 The district boundary now runs through the large chalk quarry to the east of the church of All Saints. This quarry has claims to fame in both the remote past and in relatively recent history. In 1923 a most important discovery of a Palaeolithic flint works was made, which shows that the area was inhabited at a very early date. This occupation of the land was continued-there is the site of a Roman building a little further south. In the eighteenth and early nineteenth centuries however, industry of a very different kind flourished in the white-walled quarry, for here was a large shipbuilders' yard and rope-walk. Here, for example, was built the Shannon, launched on May 5th, 1806, a vessel which can well vie with better-known Chatham-built ships for naval fame. Her duel with the Chesapeake in Boston Bay on June 1st, 1813, during the brief War of 1812 against the Americans, is famous. Beyond the quarry the road leads to Chatham Ness from which one of the best views of the Medway Towns as a whole is to be had. The towns stretch around in every direction: Chatham and its Historic Dockyard in front and to the left, Rochester with its busy shipping along the river-front and its Cathedral and Castle up on its hills on the right, and Strood, greener and more rural on the higher ground behind, while all three are linked by the wide river which curves round in a mighty sweep on three sides. This area is now the important Medway City Estate which contains a host of small - and not so small - businesses, many with an enjoyable view which, owing to the hairpin bend of the river at this point, sets you here right in the heart of the Medway Towns and yet at the same time leaves you sufficient space to look about you.

To the north-east of Frindsbury Extra, but still within the parish, are Upper and Lower Upnor. These are both well worth a visit: Upper Upnor for its single village street of tall, narrow houses, many in Kentish weatherboarding, leading down to the solid bulk of Upnor Castle; Lower Upnor more open at the foot of Beacon Hill Woods.

Both the Upnors are sailing centres, and the lines of smartly painted hulls swing gently on their orange or red mooring-buoys, casting their own continually moving reflections across the brown-grey waters, at once an extremely colourful essential of the river-side scene, and a reminder of Upnor's long connection with the water. On the shore the London stones are a more tangible reminder of a historic connection. These stones anciently marked the boundary of the charter rights of the fishermen of London to fish round into the Medway, on the northern side only.

There are two stones, one considerably taller than the other. The farther from the river is much the older. It is white in colour and is inscribed on the side away from the river with "God preserve the City of London", and on the river face with the date 1204 and the arms of the City. Below are the names of eighteenth century civic dignitaries of the capital, recording their ceremonial visits to the stones in, for example, 1775, 1785, 1789 and 1802. The other two sides of the stone also record visits, but are now almost indecipherable. The modem stone, over twice the height of the older and in brown-grey granite, also records visits on its river face, although these are more modern.